Judge Amy Coney Barrett’s prepared remarks for her Senate Judiciary Committee hearing included a familiar refrain. She told the senators and Americans watching at home: “The policy decisions and value judgments of government must be made by the political branches elected by and accountable to the People.”  This is similar to something that Justice Neil Gorsuch said in his own confirmation hearing a few years ago.  He said it was Congress’s job to make the law, while it was the job of the courts only to make sure that individual cases were fairly decided. Judges “would make pretty rotten legislators,” he added.  He said this in response to a question about the separation of powers, and he strongly suggested that the people who wrote our Constitution didn’t want judges to make laws.

These statements may seem like no big deal.  After all, most government and civics classes teach school kids that legislatures are supposed to make laws, while courts are just supposed to interpret them.  But that isn’t true.

For more than half of our country’s history, judges played a central role in deciding what the law would be.  They did this in criminal law, property law, torts, contracts, and essentially every other area of law in early America.  Judges’ role in creating substantive law was not an American invention.  The colonists brought the concept of common law with them from England, and English and American judges helped develop most of the basic legal principles that underlie modern American law.

It’s now in fashion for people to say that judges should not make policy decisions.  Conservative politicians and commentators will often complain about “legislating from the bench,” saying that judges have no business telling people how to live their lives.  Instead, these people argue, judges should limit themselves to merely judging whether laws are constitutional, and they should limit their interpretation of the Constitution to what it meant when this country was first created.

When the Constitution was written, the meaning of the term “judicial power” was relatively unsettled.  But there is very convincing historical evidence indicating that those who drafted and ratified the Constitution understood that term to include the power to make policy—especially in the area of criminal law. In the years immediately following ratification of the Constitution, there were a number of federal prosecutions brought for crimes that were not mentioned in any federal laws. Written laws were considered unnecessary because certain actions were understood to be illegal as a matter of “common law”—the rules that had developed over time in the course of individual cases. And so common law prosecutions were brought in federal courts for bribery, counterfeiting, and piracy.

As law professor Stewart Jay explains in his comprehensive history on the topic, those prosecutions were accepted as a matter of course.  All of the Justices on the Supreme Court (except Justice Chase) accepted the validity of prosecuting common law crimes in the federal courts.  So did major political figures of the time, including Thomas Jefferson, Alexander Hamilton, and John Jay.

As a result of these political prosecutions, the authority of federal judges to convict for common law crimes became inextricably bound up with those partisan positions.  Limiting the common law authority of federal judges became a Democratic-Republican cause, and Thomas Jefferson turned against it.   Democratic-Republicans eventually gained control of federal offices, including the Supreme Court.  And as a result of that political victory, in 1812 the Supreme Court declared that federal courts had no criminal common law authority in United States v. Hudson & Goodwin.

Importantly, the Supreme Court opinion in Hudson & Goodwin didn’t endorse the “judicial policy decisions are bad” position that Judge Barrett and Justice Gorsuch have offered.  The opinion was largely written in terms of the limited power of the federal government, not the appropriateness of entrusting judges with the power to set policy.  Indeed, for many decades after, the federal courts continued to set policy by creating common law in other, non-criminal areas of the law.  Criminal common law persisted in the states much longer.  Right now, more than a dozen states explicitly retain a role for common law crimes in their written statutes.

Reasonable people can, of course, disagree about how much policy power judges should have in our country.  While many state judges are elected, federal judges are not.  And there are persuasive arguments for having policy set by the elected branches of government.

But for those who consider themselves to be originalists—and both Judge Barrett and Justice Gorsuch identify themselves with that label—the argument that judges should not set policy is not consistent with their views that the Constitution should be interpreted according to its original public meaning.

The people who wrote the Constitution expected judges to play a very large role in setting legal policy in this country.  If we are going to reject that original understanding of the Constitution, why shouldn’t we reject others?

Readers like you make our work possible. Help us continue to provide the reporting, commentary, and criticism you won’t find anywhere else.

Donald Trump's solution sauce for not paying his debts

Sun Nov 1 , 2020
This, from The New York Situations about a Chicago skyscraper crafted by Trump that led to him to incur $287 million in unpaid personal debt by 2010, is extraordinary: “When the task encountered complications, he attempted to stroll absent from his enormous debts. For most individuals or companies, that would […] 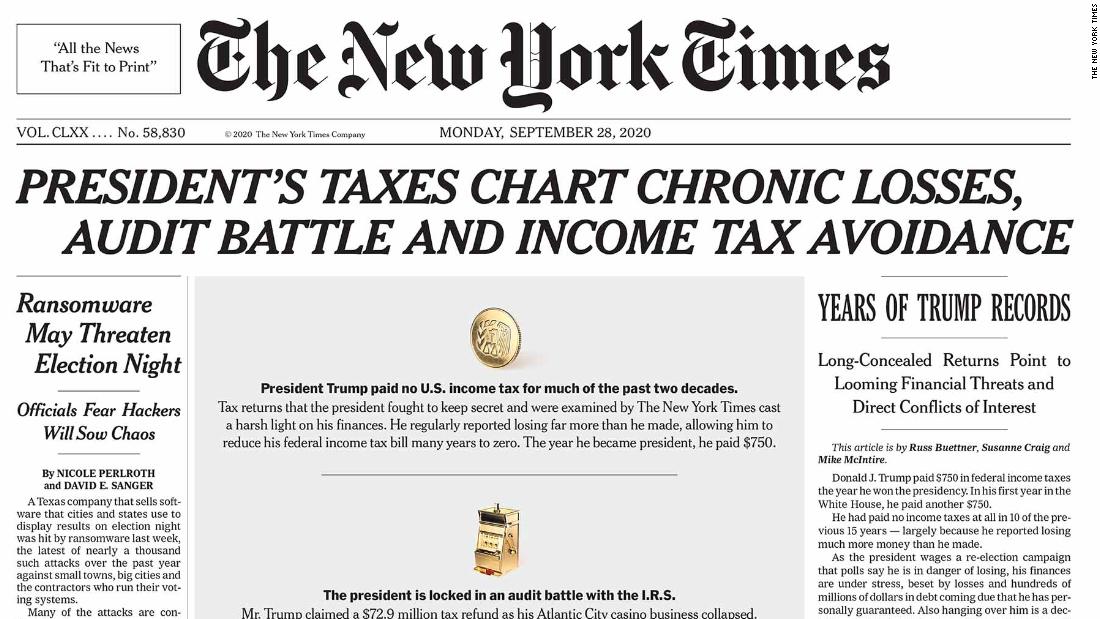